Yael Aronoff-Our communities can be pro-Israel and pro-Palestine, and pro-peace in Lansing State Journal

Yael Aronoff Op-Ed with Saliba Sarsar in the Jerusalem Post

Ken Waltzer- Our communities can be pro-Israel and pro-Palestine, and pro-peace in Lansing State Journal

Continuity and Change in Political Culture: Israel and Beyond

Topics include the legitimacy of the two-state solution, identity and memory, denationalization, the role of trust in peace negotiations, democracy, majority-minority relations, inclusion and exclusion, Biblical and national narratives, art in public space, and avant-garde theater. Countries covered include Israel, Palestine, the United States, the Basque Autonomous Region of Spain, and Poland. The first four chapters by Yael S. Aronoff, Saliba Sarsar, Yossi Beilin, and Nadav Shelef examine aspects of the conflict and peace negotiations between Israel and the Palestinians, including alternative solutions. The contributions by Naomi Chazan, Ilan Peleg, and Joel Migdal tackle challenges to democracy in Israel, in other divided societies, and in the creation of the American public. Yael Zerubavel, Roland Vazquez, and Jan Kubik focus their analyses on aspects of national memory, memorialization, and dramatization. Mike Aronoff relates his work on various aspects of political culture to each chapter in an integrative essay in the Epilogue. 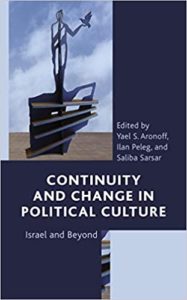 Book Description
Despite the importance of historical and contemporary migration to the American Jewish community, popular awareness of the diversity and complexity of the American Jewish migration legacy is limited and largely focused upon Yiddish-speaking Jews who left the Pale of Settlement in Eastern Europe between 1880 and 1920 to settle in eastern and midwestern cities.
Wandering Jews provides readers with a broader understanding of the Jewish experience of migration in the United States and elsewhere. It describes the record of a wide variety of Jewish migrant groups, including those encountering different locations of settlement, historical periods, and facets of the migration experience. While migrants who left the Pale of Settlement in the late nineteenth and early twentieth centuries are discussed, the volume’s authors also explore less well-studied topics. These include the fate of contemporary Jewish academics who seek to build communities in midwestern college towns; the adaptation experience of recent Jewish migrants from Latin America, Israel, and the former Soviet Union; the adjustment of Iranian Jews; the experience of contemporary Jewish migrants in France and Belgium; the return of Israelis living abroad; and a number of other topics. Interdisciplinary, the volume draws upon history, sociology, geography, and other fields.
Written in a lively and accessible style, Wandering Jews will appeal to a wide range of readers, including students and scholars in Jewish studies, international migration, history, ethnic studies, and religious studies, as well as general-interest readers.

Steven J. Gold
Steven J. Gold is professor and graduate program director in the Department of Sociology at Michigan State University and is a faculty affiliate of the Serling Institute for Jewish Studies and Modern Israel. His scholarly interests include international migration, ethnic economies, ethnic community development, qualitative field methods, and visual sociology. Gold is the author, coauthor, or coeditor of eight books, including The Israeli Diaspora, which won the Thomas and Znaniecki Award from the American Sociology Association’s International Migration Section for the best book on international migration in 2003. Author of over one hundred journal articles and book chapters, Gold received the Charles Horton Cooley Award for Distinguished Scholarship in Sociology from the Michigan Sociology Association in 2007 and the Distinguished Career Award from the American Sociological Association’s International Migration Section in 2019. 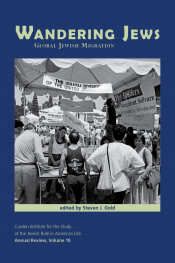 A Rosenberg By Any Other Name: A History Of Jewish Name Changing
by Kirsten Fermaglich

A Rosenberg By Any Other Name: A History Of Jewish Name Changing in America received the American Jewish Historical Society’s Saul Viener Book Prize. The prize is awarded biannually and is given to original works in English that focus on American Jewish History. The book is Kirsten Fermaglich’s original and compelling study of Jewish name changes in New York in the twentieth century. It effectively illuminates some of the key cultural and structural dynamics that enabled the flourishing of antisemitism in employment, education, and social life from the 1910s to the 1960s, and how Jews responded. In Dr. Fermaglich’s hands, New York City Civil Court records, which she reviewed in the thousands, proved to be a remarkable source for the study of Jews, who were the majority of people who filed for name changes. The petitions offered rationales for why people sought new names, and from them she builds a powerful case for what motivated first and last name changes and what did not. This first historical study of Jewish name changes is a work of intellectual depth and originality that draws on untapped sources to tell a story about real men and women who negotiated identity, the state, and antisemitism, and the consequences of their strategies. 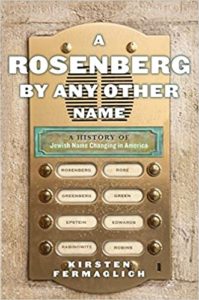