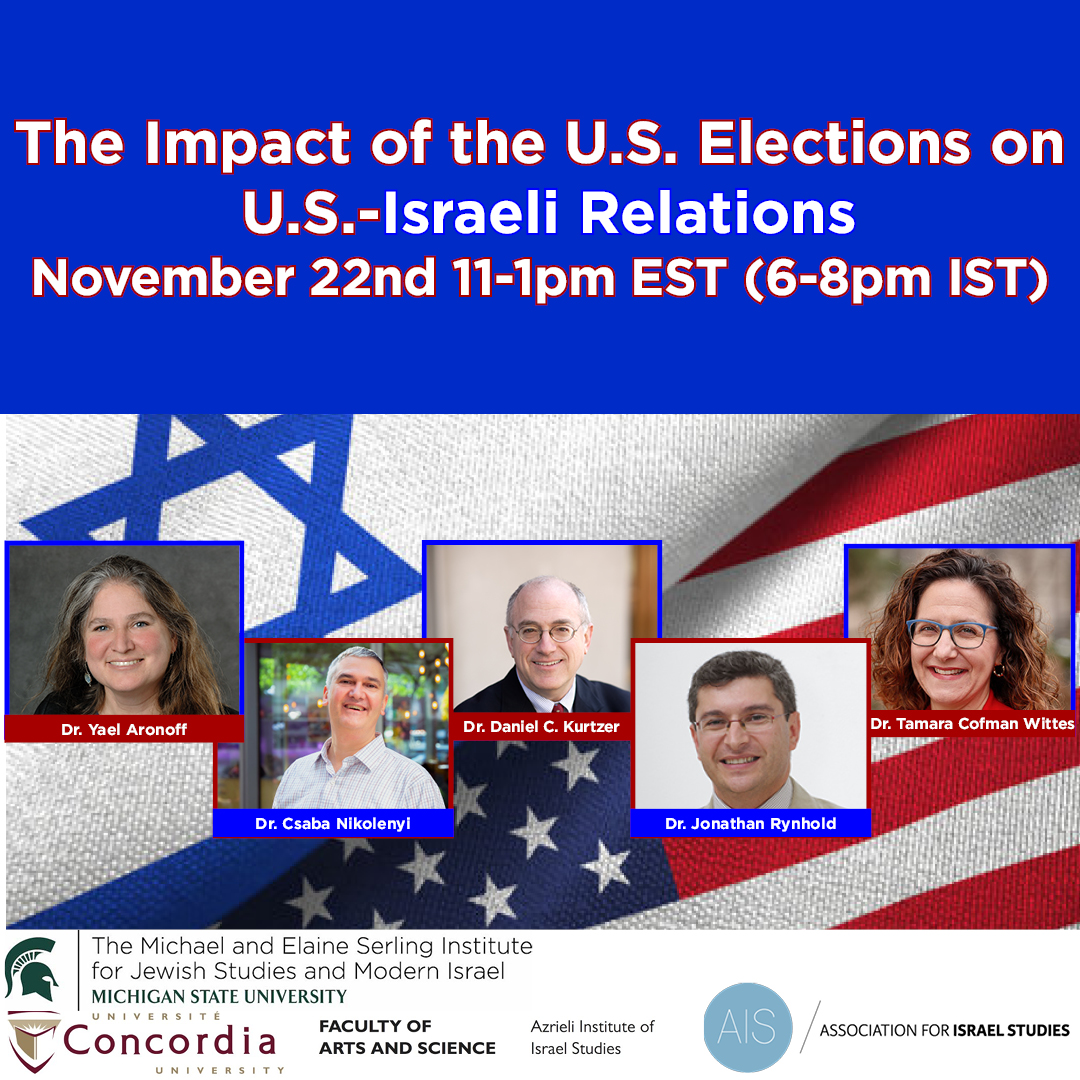 The panel will be moderate by:
Dr. Csaba Nikolenyi – Csaba Nikolenyi is Professor of Political Science and Director of the Azrieli Institute of Israel Studies at Concordia University. Dr. Csaba current research focuses on legislative politics in the Knesset and he is completing a book on the history of party switching and Kalanterism.
Participants:
Dr. Yael Aronoff – Director of the Michael and Elaine Serling Institute for Jewish Studies and Modern Israel and Serling Chair of Israel Studies. Dr. Aronoff is Associate Professor of International Relations in James Madison College at MSU. Dr. Aronoff is currently serving as the President of the Association of Israel Studies. Dr. Aronoff’s book, The Political Psychology of Israeli Prime Ministers: When Hard-Liners Opt for Peace was published by Cambridge University Press in 2014 and her co-edited book, Continuity and Change in Political Culture, Israel and Beyond was published November 2020.
Dr. Daniel C. Kurtzer – S. Daniel Abraham Professor of Middle East Policy Studies at Princeton University’s School of Public and International Affairs. During a 29-year career in the U.S. Foreign Service, Dr. Kurtzer served as the United States Ambassador to Israel and as the United States Ambassador to Egypt. Dr. Kurtzer served as Deputy Assistant Secretary for Near Eastern Affairs and as Principal Deputy Assistant Secretary for Intelligence and Research. Dr. Kurtzer is the co-author of Negotiating Arab-Israeli Peace: American Leadership in the Middle East, co-author of The Peace Puzzle: America’s Quest for Arab-Israeli Peace, 1989-2011, and editor of Pathways to Peace: America and the Arab-Israeli Conflict.
Dr. Jonathan Rynhold – Jonathan Rynhold is a Professor in the Political Studies dept. at Bar-Ilan University. His research focuses on US-Israeli relations and Israeli foreign policy. His book, The Arab-Israeli Conflict in American Political Culture (Cambridge University Press, 2015) won the Israeli Association for Political Science book prize. In 2016, he co-edited a volume entitled, US Foreign Policy & Global Standing in the 21stCentury. Among his recent publications a piece entitled, The Special Relationship: Shoring Up Declining Sympathy for Israel among Democrats.
Dr. Tamara Cofman Wittes – Tamara Cofman Wittes is a senior fellow in the Center for Middle East Policy at Brookings, where she focuses on U.S. policy in the Middle East. Dr. Wittes served as deputy assistant secretary of state for Near Eastern affairs from November of 2009 to January 2012. Dr. Wittes is a co-host of Rational Security, a weekly podcast on foreign policy and national security issues. Dr. Wittes is the editor of How Israelis and Palestinians Negotiate: A Cross-Cultural Analysis of the Oslo Peace Process (USIP, 2005). Dr. Wittes is a founder of the Leadership Council for Women in National Security.

Co-sponsors: College of Arts and Letters, James Madison College, the College of Social Science, the RCAH, office for Inclusion and Intercultural Initiatives and Asian Studies Center.